My interests center around the ability to identify the underlying processes contributing to chemical variability during reactive transport through porous media using measurements and modeling of associated stable isotope fractionations. My recent work has involved integrating stable isotope systems in numerical models of reactive flow and transport for a variety of field and laboratory experiments. These studies demonstrate the scope of processes that can be identified by considering the coupling and distinctions between chemical and isotopic variability during subsurface reactive transport: 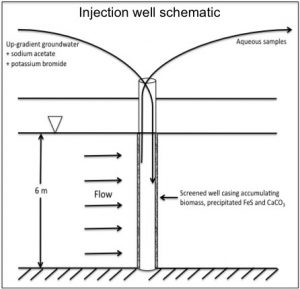 Injection wells at the Rifle IFRC field site in Western Colorado accumulate secondary precipitates leading to reduced flow rate and enrichment in fluid δ44Ca associated with kinetically controlled calcite formation. The observed variation in fluid δ44Ca is the result of a balance between competing processes of kinetic fractionation and isotopic reequilibration between the aqueous and mineral phases. A CrunchFlow reactive transport model of the system modified to explicitly treat these isotopic reactions produces an accurate simulation of measured fluid values when the Ca2+:CO32- ratio remains high. Where this ratio approaches unity, reproducing measured δ44Ca values requires a coupled modeling approach using the reactive transport code in combination with an ion-by-ion growth model. 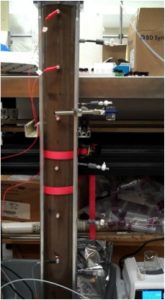 B) Flow-Through Column Experiments of δ44Ca

I design large-scale flow-through column experiments such as this 1m tall, 10 cm diameter system packed with sediment recovered from the Rifle aquifer. This study included a fluid supersaturated with respect to calcite to extend the results of the field scale study to conditions of flow through porous media. The dimensions and parameters of the experiment allowed for direct comparison to field conditions without the need for scaling relationships. Calcium isotope variability in this system reproduced the temporal variability in fluid δ44Ca observed at the field scale, and also demonstrated a spatial transience in enrichment that is simulated by accounting for the effects of kinetic fractionation, isotopic reequilibration and mixing by ion exchange. 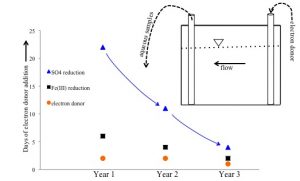 Uranium bioremediation via organic carbon supplementation has been demonstrated at the Rifle IFRC field site in Western Colorado. High sulfate concentrations in the groundwater lead to biogenic sulfate reduction during the remediation process that exerts a primary influence on the ability to sequester uranium. By monitoring the sulfate and sulfide concentrations and associated δ34S values in the groundwater over time, we have documented an earlier onset of sulfate reduction with each organic carbon amendment that is only observed in the δ34S signal. A reactive transport model explicitly treating the stable isotopes of sulfur during bioreduction using a dual-Monod rate law can capture the observed enrichment during the first organic carbon amendment and demonstrates that the size and spatial distribution of the associated sulfate reducing biomass become heterogeneous as a result of this process. Earlier onset of sulfate reduction during subsequent amendments is then reproduced by accounting for this hysteric effect in the biomass population (Druhan et al., 2012). 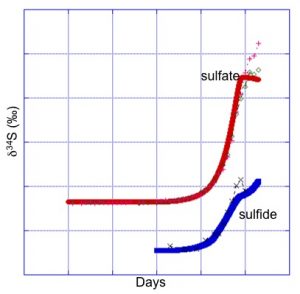 Within the lab the constraints afforded by column studies allow for collection of both sulfate and sulfide species in volumes sufficient to monitor isotopic shifts in the reactant – product pair and verify the functionality of the reactive transport model predictions of biogenic δ34S fractionation. Using the kinetic fractionation factor obtained from the field scale study, a CrunchFlow model modified to explicitly simulate 32S and 34S accurately reproduces both sulfate and sulfide δ34S as well as species concentrations throughout organic carbon amendment. The isotopic composition of solid phase sulfur species is also simulated, and presents a new means of tracking remobilization of reduced species.

Physical heterogeneity and evolution in the physical structure of flow paths during heterogeneous reactivity exert a primary control over concentrations and isotopic ratios measured in flux-weighted fluid samples drawn from wells. In order to deconvolve the effects of permeability and reactivity to infer the extent and rate of a chemical variation we require the ability to accurately observe the physical structure and evolution of permeability in a porous media. Toward this goal we have applied clinical nuclear imaging tomography methods to image the 3D distribution of a radioactive tracer in real time during reactive flow and transport through a sediment column. Thse high resolution datasets are used to assign property values to the elements of a geostatistical model using the iTOUGH2 code to obtain permeability distributions as a function of time during a chemical reaction.